The Golden Book Of Praise

Song, The Golden Book of Praise 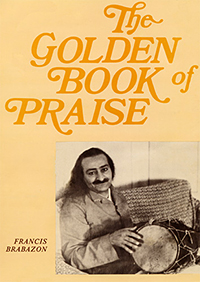 THIS BOOK: is the same collection of songs that was published in 1982 by Filis Frederick. It is Volume 20, Number One of the Awakener Magazine and is complete with musical notation, pictures, history of melodies and detailed chords.

The web page edition on the Avatar’s Abode website has only the lyrics and chords. Francis’ musical embellishments are included in the audio files on this web page.

THE CHORDS: are simplified and use the capo to keep it at the same pitch as the audio. Musicians must feel free to do their own chord arrangements.

THE AUDIO: a lot of the songs on the web page edition on the Avatar’s Abode website, use a MIDI accompaniment which I found was an easy way of recording. Some songs are taken from previously recorded CDs. A few songs have a 2nd recording and interpretation.